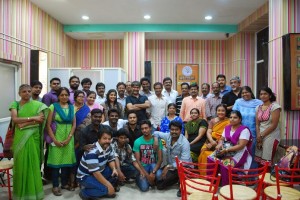 Our Group members Shoba attended from Coimbatore exclusively for this purpose. Her husband Ramakrishanan so much supportive of our Group activities and was looking after domestic front to enable Shoba attend. We cheered them.

Arvind, Kalinga Balu, Venkateswaran Kasirajan, sundararajan, sundarkrishnan Chandra could not attend from among the Chennai members – who sent messages.

PS Drama artists introduced themselves and appreciated their Director and Producers for bringing out their best in the stage. From our side we recorded our great appreciation for giving Life to the Characters with which we are so familiar and amazed. Kumanan could not attend but wished the meet success.

this Meet by itself is History because when 1950 Kalki wrote this Fiction to make Tamil readers recall their glorious past – immediately after Independence – since they are much exposed to British style till then – he drew the attention of the masses to patriotism and linguistic patronage.

In 2002 when we formed our e-group we are carrying out this objective through our members participation and spread using modern technology.

In 1999 (of course our was not formed) and in 2014 when Magic Lantern gave visual effect to this objective this also reached masses.. Venkat enquired and they replied that about 18000 to 20000 persons attended the drama (in all the 3 venues).

We recalled various Authors from our Group like dhivakar, gokul, murugandam, visvaksenan,kalisam, pavirtha, ramji and bloggers Vijay (Poetry in stone), Vairam Palaniappan ( Karkka Nirkka) and others.. those present expressed their Greetings on the details of Adipperukku provided by Dr. Jaybee and congratulated them on their 17th year beginning.

Rajavelu recalled the yomen service by Dr. Rasamanickanar and was proud to be among his grandson Kumarvel. Dr. Padmavathi also shared her happiness on this.

Venkat outlined the Project – Chennai – and the Heritage monuments on the banks of river Coovam. When he expressed there are about 70 temples and when Rajavelu reinforced that majority of them is of Gajabrishtam (sitting postue of Elephant back style) was thinking these are pointers towards the 70 + temples of Aditya Chola !!

When Swetha honoured Dr. padmavathi she recorded her appreciation for decoding the finding of Sengam Inscription – reinforcing Kandalur salai event as war expedition !! And also shared that our dear Gokul changed the Climax of Cheran Kottai !!

A fusion of Kalki PS e group and PS Drama artist joint meet has paved way for spreading more awareness of glorious past. This meeting is the first of that kind (Historical in a way) – a group of ardent members for a Fiction and a group of ardent performers for the same fiction – meeting on a related eventful day !! Facebook members expressed desire to join e-group and some artists expressed desire to join both.

We could not discuss the programme to celebrate the commemoration of Emperor Rajendra I’s 1000th year.
We may combine with REACH or any other Group which is contemplating to celebrate. will share more details on this later.

After the meet was over, Magic Laten group members expressed their happiness of the meet during informal exchanges.